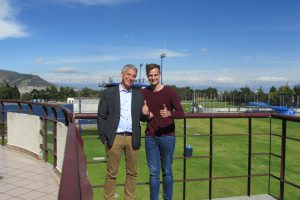 Tec de Monterrey does a lot for the safety of its students. There is more information about it here: Safety and Security at Tecnologico de MonterreyI

Anyone planning a longer stay abroad knows that many things are different there than at home. In terms of personal safety in particular, we are used to a high level in Germany. But we are experiencing changes: nationwide violent riots at demonstrations, dramatic attacks at a Christmas market or in a university, armed attacks on people and much more. This is reflected in foreign media, which has already led to worried inquiries from foreign partners as to whether it is still possible to travel to Germany with a clear conscience!

This reversal of perspective should not and must not embellish anything, but it can be helpful in assessing the question of security in relation to other countries and regions of the world, even in those that are not superficially viewed critically: Who would feel safe moving in cities like Detroit or Chicago? What counts a human life in the mafia environment of Italy? How should Eastern European countries be assessed? How is the situation in Africa developing?

Against this background, how should the security situation in Mexico be assessed? To answer this question you can

The Federal Foreign Office provides an objective picture of the security situation in Mexico (click here). You are strongly advised to read this information carefully before traveling to Mexico. It should be noted that – apart from the classification of the country as a corona high incidence area – there has been no travel warning from the Federal Foreign Office for Mexico as a whole for a long time. However, there are warnings against visiting individual states and regions, currently exemplary and in particular the states of Colima, Sinaloa, Tamaulipas, Guerrero or the extreme north near the border with the USA. There is also a travel warning for the Riviera Maya region, which is very interesting for tourists. It should be noted that our Mexican partner universities – apart from Chihuahua – do not have a campus relevant to student exchange in a region classified as critical.

In addition, as in many countries, there are general and very clear instructions on how to behave. These should, of course, be read before departure and followed as a matter of urgency.
We have long been in close contact with the DAAD office in Mexico City, the German embassy, ​​(German) industrial companies in many parts of the country and, of course, our colleagues at Tec de Monterrey. All of these partners confirm what the Federal Foreign Office has said, according to which there are regions to be avoided, but other regions can be considered safe, and that compliance with the rules of conduct is important. Our many students who have completed a study visit in Mexico usually say: You have to know when and where you can stay, then it is not a problem, they have never felt unsafe and would recommend studying in Mexico to every fellow student .

Another topic is the threat of earthquakes. This is given without any discussion and has already caused great damage locally. So far, however, none of our students have been affected. And we experience great care from the Mexican partner universities for foreign students.

In summary, it can be said that the life risks in Mexico – as well as in many other countries in the world – are significantly higher than in Germany. These risks are offset by the chance of a special life experience. Every interested student must clarify and decide for themselves how the risk is to be classified.

Finally, it should be noted that the persons responsible for the mdhk at the DHIK have been in Mexico regularly for many years, some since 2000, some have studied there themselves and have not had to experience any really dangerous situations so far. Rather, they are all committed to the further development of cooperation with Tec de Monterrey and other universities and companies. In addition, reference is made to the enthusiastic reactions of the students who have embarked on studying in Mexico.

We are happy to provide interested students with further information.